When Sara Nelson, president of the Association of Flight Attendants, in her keynote address at the 2019 Labor Research & Action Network (LRAN) conference said, “the solidarity and courage of working people is the greatest force for good in human history,” it was just what the audience wanted to hear. Nelson has lately been a prominent labor leader after calling for a possible general strike to end the recent government shutdown. She brought that message of working class strength and solidarity to the conference, stressing that using power builds more power - it’s not a limited resource. 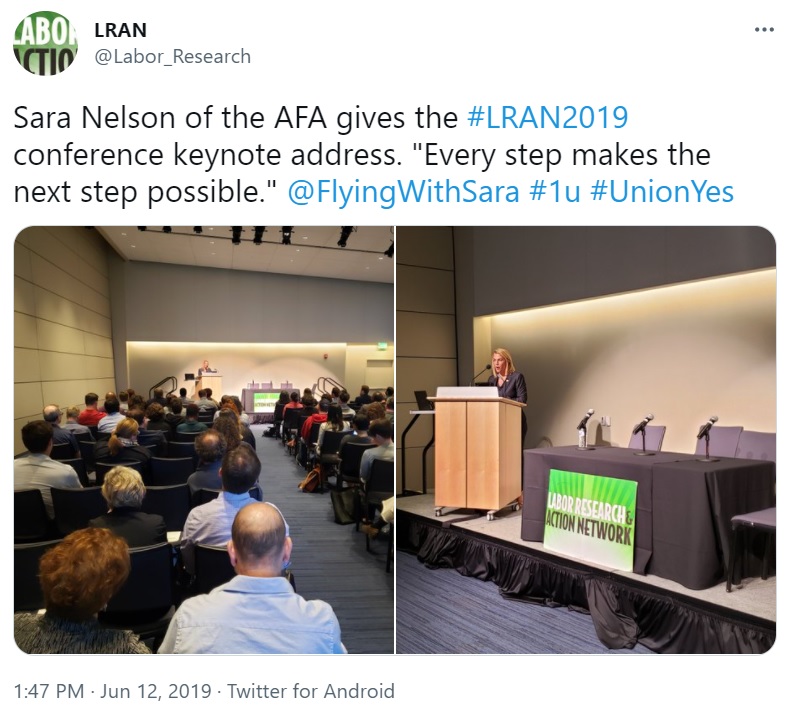 This was LRAN’s 9th annual conference, which drew over 150 participants to Case Western Reserve University in Cleveland. Founded in 2011 by Jobs with Justice, LRAN is a network of over 1,000 labor academics and staff at labor unions, workers centers and community organizations who share research and strategies to help worker organizing and build labor movement power. The conferences are typically held in different areas of the country and often draw activists from that region. The past three conferences have been held in Nashville, Washington DC and Chicago.

This year’s conference theme was “The Future of Workers,” focusing on themes such as organizing in fissured workplaces and the gig economy and the impact of technology on work and organizing. The conference program can be found here.

The opening plenary panel featured organizers from campaigns in Cleveland. Kelly Granda discussed the AFT’s successful campaign to organize her local charter school and fight against the boss’s agenda that “students are revenue and this is a business.” Rachel Dissell talked about the struggle of her News Guild local to fight against cuts at the Cleveland Plain Dealer - one tough fight among many in a restructuring industry.  Camilo Villa outlined SEIU’s successful contract fight for hundreds of Cleveland janitors under the campaign framing of “One Cleveland.” 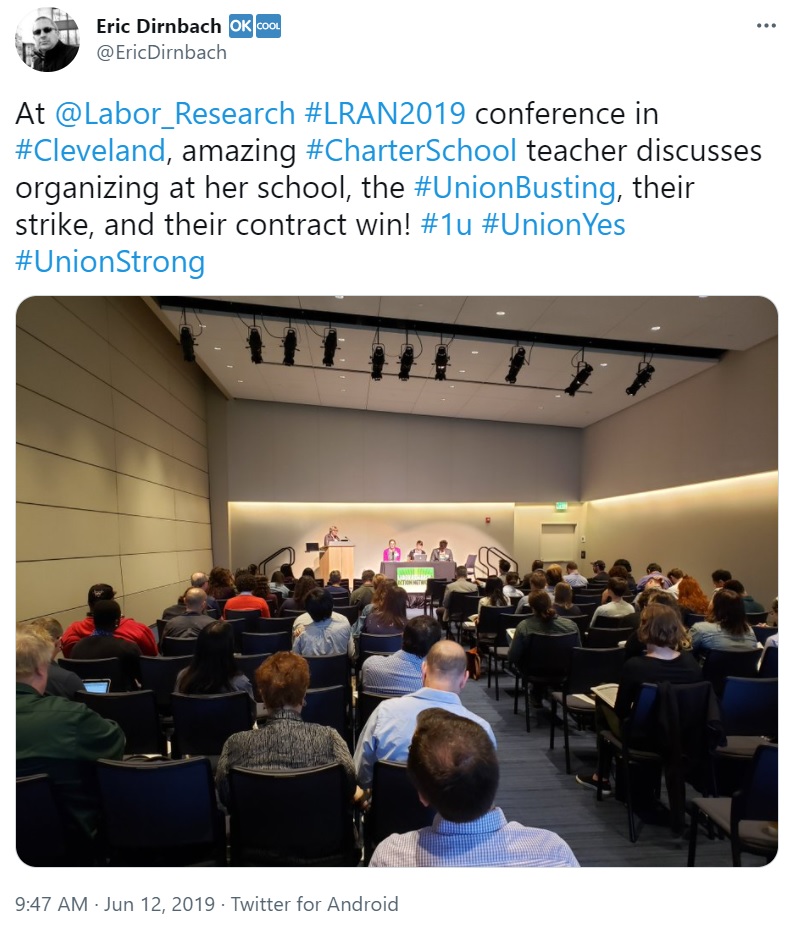 The second conference plenary panel featured labor strategist and author of No Shortcuts: Organizing for Power in the New Gilded Age, Jane McAlevey. She has made waves in labor movement circles with her strong arguments for revitalizing large-scale strikes, as we have seen with the teachers’ strikes over the past year. According to McAlevey, we can organize successful strikes with wide member participation through a series of “structure tests” where we have rigorous and honest member assessments to track our power. Fellow panelist Grace Regullano of the United Teachers of Los Angeles discussed the union’s recent strike and how better, real-time data collection and member engagement was crucial to their victory. Veteran labor reporter Steven Greenhouse and author of the new Beaten Down, Worked Up: The Past, Present and Future of American Labor, offered his thoughts on the state of the labor movement. 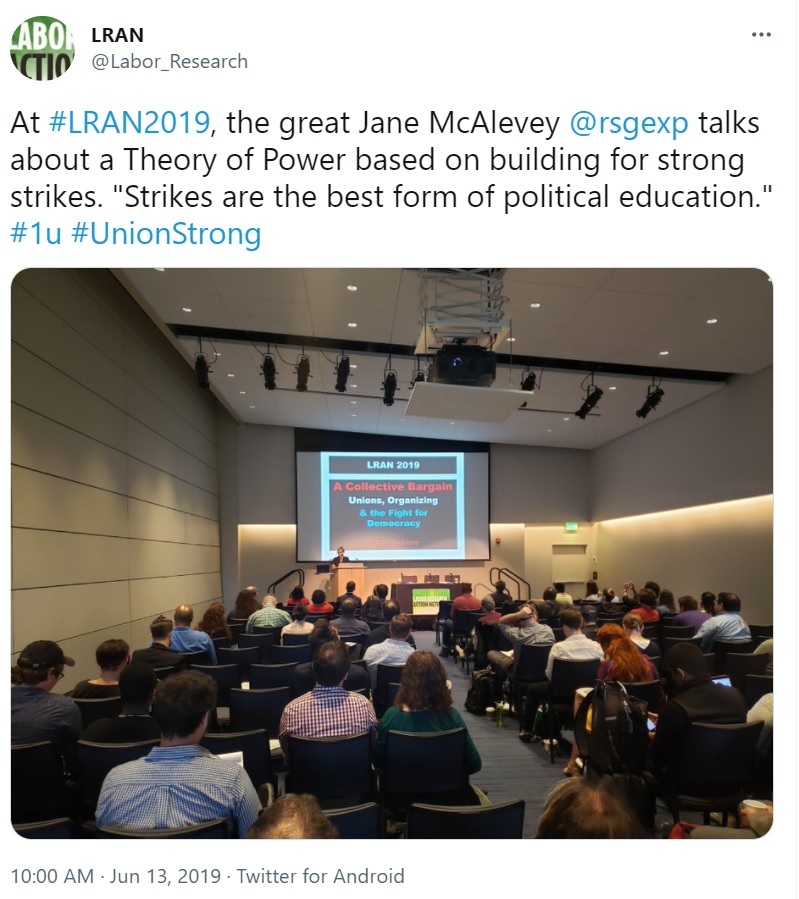 Workshop Panels on Organizing in a Changing Economy

Several conference panels discussed temp worker and logistics organizing. A session on Emergent Strategies for the Contingent Work Crisis discussed temp worker organizing in the Chicago area. Panelist Chris Schwartz of Blue Pencil Strategies outlined his research into the huge subsidies given to large temp agencies through the Work Opportunity Tax Credit and suggested policy interventions that could address this problem of subsidizing low-wage temp jobs. Tim Bell of the Chicago Workers Collaborative discussed the development of a temp agency “seal of approval” program that would encourage better labor practices in this low-road sector.

At another session titled Future of the Supply Chain: Workers, Subcontractors, Misclassification and Technology from Ports to City Streets, panelists discussed worker organizing at ports and Amazon warehouses. Beth Gutelius of the University of Illinois-Chicago discussed how new technologies are speeding up warehouse work and increasing worker surveillance, and Steve Viscelli of the University of Pennsylvania reported on his research into the development of driverless trucking.

Staff from the Bargaining for the Common Good project led a discussion about this developing initiative which is building labor-community partnerships to “reinvent collective bargaining for the 21st century.” This framework is experimenting with unions and ally groups using contract fights to go beyond workplace wages and benefits and organize around a broader set of demands that benefit the wider community. In the public sector, unions like the United Teachers of Los Angeles have used this framework to challenge the austerity agenda of the ruling class that makes us “broke on purpose.” 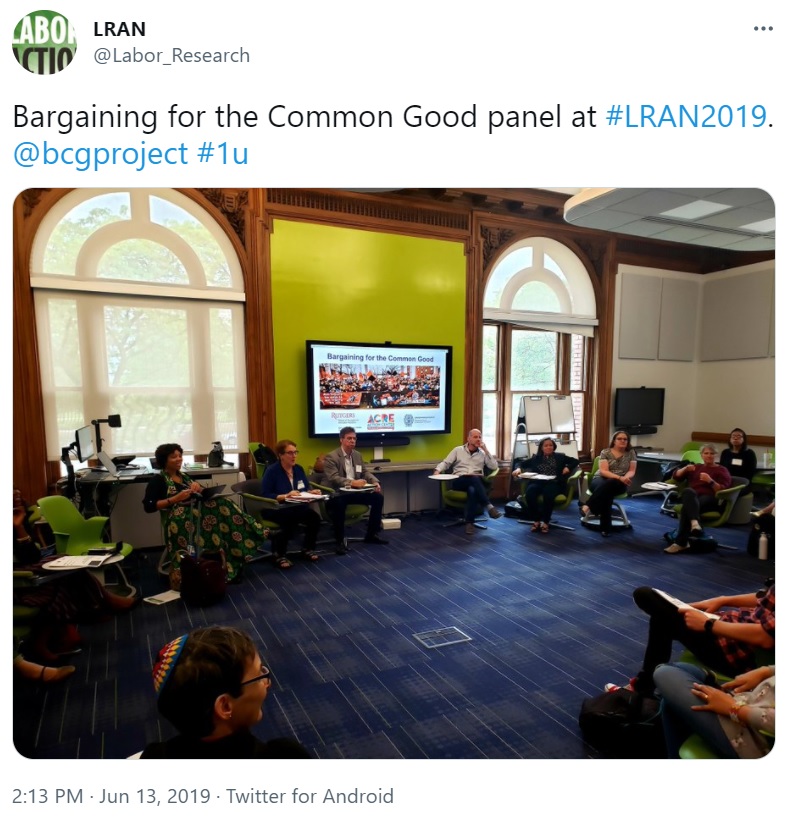 The Future of LRAN

The annual membership meeting, held at the conference, highlighted the ongoing projects of the network, which includes regular webinars on labor research and organizing campaigns, as well as building a cohort of black researchers in the labor movement. The attendees discussed expanding the network, developing a campaign research training, and working more with communities of color. We also discussed the possible sites for next year’s conference, and the LRAN Advisory Committee recently decided that the 10th annual LRAN conference will be held in Atlanta in conjunction with the Jobs with Justice 2020 conference in March.

Eric Dirnbach is a union researcher and an LRAN Advisory Committee member.